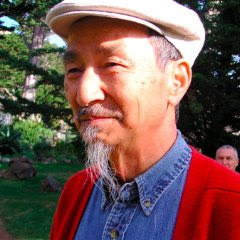 The exercises that Master Lew teaches are part of the "internal system" of the martial arts, known as Nui Kung or energy cultivation. These exercises strengthen the circulation of the Chi (vital energy), which increases vitality, health, and sensory perception. All of these exercises have traditionally been kept secret. Daily practice of the exercises will give the student a tangible experience of Chi energy.
The Cloud Hands set is the beginning set of Nui Kung (internal energy cultivation) which builds a foundation for both better health and further Nui Kung. The Cloud Hands consist of five relatively non-strenuous movements along with quiet seated meditation. These Taoist exercises help the body maintain good health and increase vitality. The time required for practice will fit into anyone’s schedule.
****

The Instructor
Share K. Lew, now in his nineties, is a Taoist priest with over 70 years experience in the traditional Taoist arts. Master Lew received part of his education at Wong Lung Kwan, a Taoist monastery on the Luo Fo mountains near Canton, China.
Master Lew studied at Wong Lung Kwan monastery for 13 years. During that time he trained in the full range of Taoist healing and martial arts. At the core of his training was the secret system of cultivation known as Qigong (Chi kung). Master Lew was the first person to openly teach authentic Taoist Qigong to non-Chinese, beginning in Los Angeles in 1970. Master Lew’s monastery style, the Tao Ahn Pai (Taoist Elixir Style), dates back over 1300 years to Lu Dung Bin, who was born during the Tang Dynasty, and became one of the Eight Immortals of Taoism.

Reservations: Pre-registration is recommended. A deposit of $100 will reserve your space. Class size is limited to 35 people.
• Bring a small pillow to sit on
Posted by Michel at 3:50 PM No comments:

Q: I have the herpes virus. Based on my studies, I know you can not tell me that you have a cure for herpes, I know you can not use the word cure. However, I need t know what is your best product for my condition and has any of your customers told you that they feel better after taking your product for this type of virus. Also Do you have an herb called PRATAN. This herb comes from Thailand and suppose to be good for herpes. Can you assist me in making a connection to some body in that country.
A: The Long Dan Xie Gan Wan is the best formula for this problem. It is to be taken whenever you feel like you are having an outbreak. Don't take it all the time. This product is not a cure but helps control the outbreaks. You also need to have a good diet and reduce stress to prevent future outbreaks and above all don't have sexual intercourse when you are having an outbreak. Do not pass this on.
I am not familiar with the herb Pratan.
Posted by Michel at 7:45 PM No comments:

Q: I was wondering which products you suggest for hearing loss and tinnitus.

A: Er Long Zuo Ci Wan, is according to Chinese medicine books, said to be helpful. It all depends on the cause of the tinnitus so I really don't know if it would help or not. You may have to try several weeks or longer.

Posted by Michel at 3:55 PM No comments:

Looking to make a pleasant tasting tea? Add 3-4 chrysanthemum flowers along with the juice from half a lemon and add a little bit of honey to make a surprisingly delicious tea! Chrysanthemi, Flos (Chinese: Ju hua)) is said to be good for the eyes and clears and calms the Liver.

You can buy Chrysanthemum at www.eastearthtrade.com

Posted by Michel at 3:37 PM No comments:

The topic of Acupuncturist's translating Chinese medical texts came up in a discussion recently. Occasionally I'll run across articles where an American acupuncturist's states that he or she translated the original Chinese text for the article. For example, Bob Flaws, OMD, of Blue Poppy Press, is a prolific "translator" who, according to his biography, taught himself to read "medical Chinese". He has in the past offered courses on reading Medical Chinese. He has also published a book "Teach Yourself to Read Modern Medical Chinese: A Step-by-Step Workbook and Guide". The pitch for this books states: "Bob shares all the 'quick and dirty' methods he’s used to teach himself. You can begin translating modern medical Chinese within hours"
While I have never read the book, advertising the translation methods as "quick and dirty" or promising you can begin translating Chinese into English "within hours" makes it sound like a side-show carnival product.(1)
Don't be misled, Chinese is not an easy language to learn or translate. The US Government classifies Mandarin Chinese as a Category IV language - one of the most difficult languages for native English speakers to learn.
My concern is that Acupuncturists that read some of these "translated" articles or books take for granted that the translator is actually qualified to do that kind of work.
Those who want to translate and publish Chinese medical texts into English need to have a formal education in Chinese Language and translation from an institute of higher learning.
I propose passing Level 11 of the HSK exam as a minimum standard for translators of Chinese medical texts.
The HSK(2) is a standard test of Proficiency in Chinese language. The amount of words a person should know at the basic test level ranges from 400-3,000 Chinese words. In the advanced level HSK (Level 11) they should have knowledge of 5,000-8,000 words. According to the HSK website a person passing HSK Level 11 is proficient in Chinese at the advanced (high) level and can be regarded as qualified as an intermediate-level translator.

I also believe that a translator in the field of acupuncture should have the translations reviewed for accuracy by a translation committee prior to publication.

The whole purpose of setting high standards is to elevate the profession of acupuncture and make sure that accurate information is disseminated to practitioners.

Notes:
(1) A reviewer on amazon.com said this about Bob Flaws book:
"...I would like to say though, I found the book not that helpful in two ways. 1) The terminology although has pinyin romanization, it lacks the intonation marks. While this book is for reading, tones added will make the book able to help those wanting to learn to speak or listen to Chinese. 2) The book is full of errors. The wrong characters are written and often the meaning is either too simple or in error...so many errors!

Did you know that if you are a Chiropractor in Texas you can practice acupuncture with just 100 hours of training? As unbelievable as it may seem this is true.
To put this in perspective, to qualify for the NCCAOM (National Certification Commission on Acupuncture and Oriental Medicine) which is accepted as the main certifying agency in most states you need almost 3,000 hours training from a formal education program that is accredited by the Accreditation Commission for Acupuncture and Oriental Medicine (ACAOM).

So, do people in Texas seeking acupuncture treatment know this? They should. Chiropractors in Texas who portray themselves as trained acupuncturists are less than forthright. They have organizations they belong to but as far as I can tell they certify themselves.
Think about 100 hours of training. That's not much in any field, much less medicine. For comparison, in a typical Oriental Medical College that will produce a Licensed Acupuncturist (L.Ac.), a first year student will take 165 hours a semester and they won't even begin to touch a needle much less claim to know acupuncture.

My advice: If you live in Texas and seek acupuncture go to an acupuncturist with the credentials of "L.Ac." (Licensed Acupuncturist) These people have extensive and proper training and will be much more capable of treating you as a professional - and they won't have studied acupuncture by correspondence course either.

Q: Is there any wheat or any form of gluten in Culing Pill?
A: One ingredient, Massa Fermenta, or MASSA FERMENTATA (Chinese: Shen Qu) is in the formula. You probably don't want to use it.
Posted by Michel at 7:42 AM No comments:

Drinking green tea may not only prevent cancer - it may also shrink tumors. University of Mississippi medical Center researchers gave water mixed with a green tea anti-oxidant called EGCG to mice with breast cancer. After five weeks, their tumors were 66 percent smaller and 68 percent lighter than those in mice who drank just water.
As Reported by the Reader's Digest (October 2008, page 121).
Posted by Michel at 10:14 AM No comments:

Q: Could I melt the capsules? I'm not very good at swallowing big pills.

Is this something I will have to take everyday to feel the effect? I am looking for something that's more "on the go" type or immediate relief.

A: You can open the capsules and pour the contents into tea. I'm not sure how well it would dissolve. One trick to swallowing any pill or capsule is to tuck your chin down as you swallow. The capsule will go down much easier this way. If you tilt your head back it is much harder to swallow anything.

You might take it daily for the 1st two weeks than use as needed. You'll have to see how it works for you. Herbs are not as strong as prescription drugs so you can't always expect "immediate" relief, especially if you are using it for panic attacks or anxiety. It may need to build up in your system.
Posted by Michel at 8:12 AM No comments:

Q: my dog has high liver enyzmes vet doesn't know why with Diarrhea muccus can she take liu wei Di Huang wan if so she is 28 lbs how much can i give her and how many times aday are 2 pills enough? i want to make sure on the box it says something about liver problems i'm confused because it's for the liver

A: Use about five pills a day for a 28 pound dog. The liver warning on the box has to do with the product containing licorice. If you take about 1/3 of an ounce of licorice daily for months on end you may have blood pressure problems - hence, the warning. However, there is not even a gram of licorice in the whole box. The warning is just to protect the company in case of legal action. You should also know that this product has been around for over 200 years without a warning label and many other companies make the same product without a warning label. However, you need to make the choice whether to use it or not.
Posted by Michel at 7:48 AM No comments:

Q: I suffer from inflammation in many parts of my body, especially along the meridian (gall bladder?) which runs down the outside of my thighs and on down, so much so that just touching anywhere along it causes extreme pain. The other issue is poor circulation, where my hands fall asleep at night. I don't know if these two things are related, but wondered if there were something you could suggest taking for either/both of these issues.
A: The pain down the side of your leg could be sciatic pain or sciatica. Du Huo Ji Sheng Wan may help.
The hands falling asleep at night may be carpal tunnel syndrome. China Tung Hsueh may help.
Both these products can be found at www.eastearthtrade.com
Posted by Michel at 8:01 AM 1 comment: