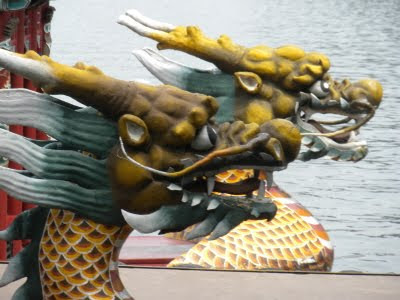 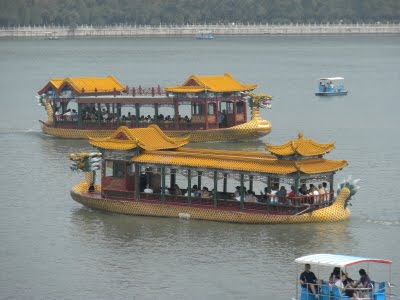 Our first weekend in China was spent sightseeing. Close to the university is Yi He Yuan or The Summer Palace. There's a big lake and lots of interesting things to see. It is a very nice place to go to.
Here's a picture of some boats on the lake and the dragons on the front of the boats.
Posted by Michel at 6:03 PM No comments: 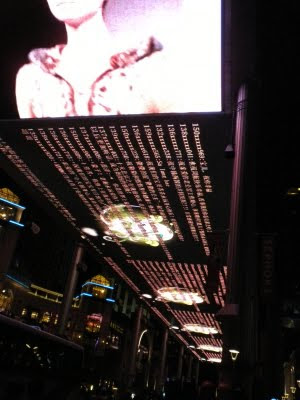 At Shi Mao Tian Jie, (in English, known as "The Place"), there is a huge courtyard between some large office buildings. In the center is a huge video screen. Do you remember watching the opening ceremonies of the Olympics and they rolled out the large video screen on the floor? This is very similar to that only it is suspended in the air and you look up to see it. My guess is that it is at least the length of a football field, maybe even longer. It is like a park underneath and people eat, have drinks or children rollerblade and play. When we arrived they had a listing of people's cell phone messages on the screen. Apparently you could call in and have them posted. After that there was a show about the solar system that was pretty amazing. Hannah said it was ironic that we'd sit outside on the ground and look at a video screen to see the stars.
The picture to right is from the front as you walki in off the street. The screen curves upward.
Video below is taken approximately from the second of the last two sections seen in the picture.

Posted by Michel at 5:23 PM No comments: 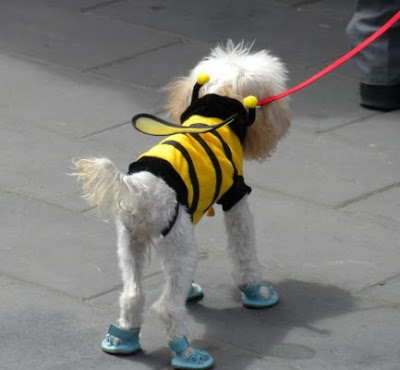 While we were at a large market we saw a man walking this lttle dog. I ran after him to get a picture and snapped this just before he picked him up and disappeared into the crowd.
Posted by Michel at 5:21 PM No comments:

The Bird's Nest and Water Cube 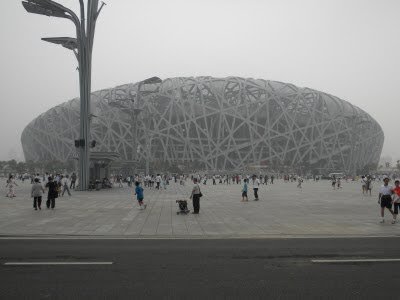 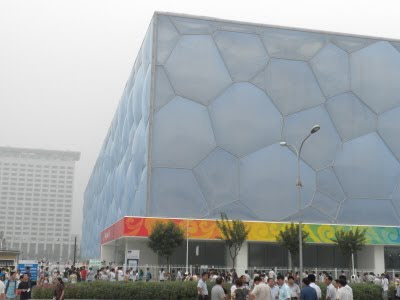 We visited the Olympic Park and saw The Bird's Nest stadium and Water Cube. The visibility that day wasn't very good as you can see from the pictures.
Posted by Michel at 9:41 AM No comments: 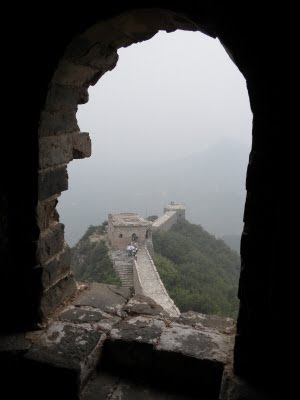 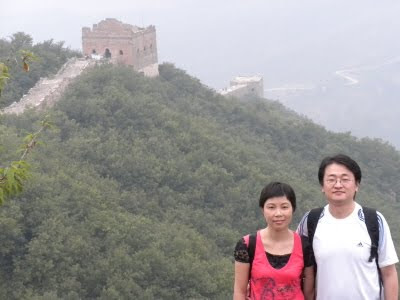 My friends, Wang Leyan and Wu Ceng, escorted us to Simatai Chang Cheng (Great Wall). Of the three sections of the Great Wall you can see in the Beijing area, Simaitai is, in my opinion, the most spectacular. With the help of Leyan, I hired a car and driver and off we went for the day. The weather was cooler and slightly rainy that day which was ideal since the previous week had been very hot and humid. Simatai is on a mountain ridge and the general feeling, when you are at the top, is that you are in an airplane with the valley far below. After our hike we had a nice lunch and drove back to Beijing.
-Having Leyan and Ceng as friends in Beijing made the trip extra special. Leyan met Hannah and I at the airport when we arrived and helped us get settled in at the University and they took us to restaurants and places that we never would have know of ourselves. Their help was very much appreciated.
Top Left: Wang Leyan and Wu Ceng
Top Right: Picture of the Great Wall from inside a tower.
Note: The main picture on The Riverlands blog (at the top of the page) is from Simatai when I first went there 11 years ago with another friend, Dong Qiang. Tourists are not allowed to walk that section any more as it is too narrow and dangerous.
Posted by Michel at 9:28 AM No comments:

Here's a video of some musicians playing classical instruments. As with the singers they are just another group of people who get together and have fun.

Posted by Michel at 8:53 AM No comments:

Posted by Michel at 8:32 AM No comments: